Banning Justice Center is a fairly new addition to the Riverside County Court system. The Banning Courthouse was built in 2015 and is located just off of I10, in the middle of Banning, California, at: 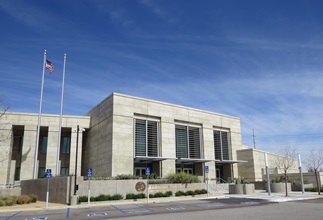 To reach the Banning Justice Center, take I10 to Hargrave Street. Head North on Hargrave Street, then turn left onto Ramsey Street. The courthouse will be on your right.

Prospective jurors are selected from voter registration rolls and DMV records. Jury service in mandatory and may be required as often as once a year. The length of jury service can vary from one day to the length of one trial, from 8:00 AM to 5:00 PM each day. Jurors should dress in appropriate clothing. Business dress is suggested. Tank tops, shorts, strapless dresses, bare midriffs, beach shoes, and bare feet are not allowed in the courtroom.

When appearing for jury duty, jury members will be required to submit to screening through a security device. Items not allowed in any court room:

*No cameras are allowed inside the courtroom.

Jurors may park in the parking lot in front of the courthouse but will need to display the parking permit that was provided on the jury summons. Place the parking permit on the dashboard of your vehicle. This permit allows all day parking for people summoned to appear for jury duty that day.

If you require transportation to appear for jury duty, you are allowed to ride free of charge on the Riverside Transit Agency buses by showing your juror summons badge to the bus driver. Bus routes and schedule information is available at RTA (800) 800-7821 or online at www.riversidetransit.com.

Being Excused From Jury Duty

Jurors can be disqualified from service if they know someone related to the case or if they are a member of law enforcement. A prospective juror can ask to be excused from jury duty if serving would place an undue hardship on them. However, the judge makes the decision about the hardship and whether the circumstances constitute a hardship.

While child care services are provided at some Riverside County Courthouses, the Banning Justice Center does not.

Failing to Appear for Jury Duty at the Banning Justice Center

Jail Near the Justice Center

The Larry D. Smith Correctional Facility is located near the Banning Justice Center. The Banning Justice Center is frequently used to process the criminal cases of the persons being detained at the Larry D. Smith Facility. If you, or someone you know, is being held at the Banning Jail, contact Mr. Nice Guy Bail Bonds at (844) 400-2245. Mr. Nice Guy or a member of his friendly, professional staff, will get to work immediately, to help you or your loved one get home to friends and family as quickly as possible.

Bail at the Banning Justice Center

Bail is an amount of money required by the courts to obtain a release from jail. The court holds onto the money until the court case has come to a close, and then returns the money to the person who paid it, provided the defendant has shown up for all of their hearings and court proceedings. Bail is set by the county and posted at each detention facility. If you, or someone you know, is in the Banning Justice Center jail, call Mr. Nice Guy Bail Bonds for help in posting bail and getting back home as soon as possible.

How Much is Bail at the Banning Jail?

Bail is an amount of money, held by the court, to ensure that a defendant will appear for hearings and trial proceedings. The amount of the bail required depends on the charges and is determined either by the arrest warrant, a hearing, or the bail schedule posted at the jail.

If you, or someone you love, is being held at the Larry D. Smith Detention Facility, you'll want to post bail to get out of jail as quickly as possible. For help in posting bail, at the lowest rates available by law, call Mr. Nice Guy Bail Bonds at (844) 400-2245.

To determine the amount of bail that will be required, you follow several steps, using the  Riverside County Bail Schedule.

In cases where the arresting officer suspects that the money being used for bail was gotten through illegal activity, the officer can file special paperwork asking that no bail be available to the defendant until a hearing has been held.

The state of California requires that all bail bond companies charge 10% of the total amount of bail, in order to post bond for a defendant. That means that if the bail is $20,000, the bail bondsman is required to charge $2,000 to post a bond in place of the bail. While this may still seem like a lot of money, it's far less than having to pay the entire amount. The rates the law requires for Federal and Immigration Bonds can be as high as 15 – 20%. But, all of these rates are set by statute, and all bail bond companies are required to charge the same amount.

California law allows for a discounted rate on bail bonds if the defendant retains a private attorney and pays the premium in full within 72 hours. These discounts are allowed for government union workers, members of the military, and AARP members. These discounts are determined by the surety company that is writing the bonds for the bail bond company.

Mr. Nice Guy Bail Bonds has the best rates on bail bonds. How can we make that statement when all bail bond companies are required to charge the same 10% fee? Mr. Nice Guy Bail Bonds uses a Surety Company that allows them to discount bail bonds to just 7% if the defendant retains a private attorney and pays the premium within the first 72-hours. There's no lower rate available, anywhere.

Mr. Nice Guy Bail Bonds saves you money in other ways, as well.

Mr. Nice Guy Bail Bonds doesn't charge any of these fees. There is always just one flat rate, no interest, no hidden fees, no surprises. Other companies may advertise the same 10% rate that everyone is required to charge. But, what they don't tell you is all the other fees you'll end up paying. Mr. Nice Guy never charges these additional fees, so you'll end up paying a lower rate, no matter what the other guys are advertising.